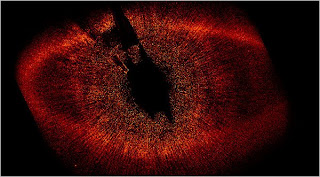 Scientists in Vancouver, BC, and Berkeley, Calif., have found the first solid, we-really-see-them planets in the galaxy. Orbiting Fomalhaut and a star pitifully named HR 8799, 25 and 130 light years from earth, respectively, the four planets are the first to actually be seen rather than just inferred based on dips in starlight and/or wobbles in their suns' or nearby bodies' orbits. They are big -- from 3-10 times as large as Jupiter.

According to the New York Times article discussing the discovery: "Both systems appear to be scaled-up versions of our own solar system, with giant planets in the outer reaches, leaving plenty of room for smaller planets to lurk undetected in the warmer inner regions. Dust rings lie even farther out, like the Kuiper belt of icy debris extending beyond the orbit of Neptune."

The two teams discovered the planets using the Hubble Telescope and the telescope on Mauna Kea in Hawaii.

Stuff like this makes me wish I had been an astronomer, which would have been possible except for the simple facts that I am a math moron and I hate night work.
Posted by Atlantajan at 9:04 PM No comments:

I am watching stars

Legend has it that the monk, Dom Perignon, upon tasting his first glass of what would come to be known as "champagne," exclaimed, "I am drinking stars!"

For people like the Ward sisters, of which there are six, drinking stars is only moderately less interesting than watching them. But the light pollution in my hometown of Atlanta, means a lot of effort (staying up until all hours and making sure there are enough blankets around) for very little reward.

So this year, I am heading to my parents' home near Amelia Island, Florida, where a few sisters have gathered cots, sleeping bags and a cooler full of stars to drink, and where we will set up camp outside next to the marsh to watch the Leonids in what is still a fairly dark sky. I am desperately sorry that one sister, Cathy, the founder and hilarious voice of this blog, will not be with us, but we'll be waking her up with the occasional drunken phone call to join her in singing "Aquarius" and intoning William Shatner's introduction to Star Trek: "Space, the final frontier..."

For those few of you who may read this and not know this stuff: The Leonids are the pieces of junk thrown off of Comet Temple-Tuttle. The shooting stars they produce appear to arise out of Leo, thus the name, and appear at the ungodly hour of 4-5 am in the northeast sky.

This will be one of those rare times when we are all sitting outside and someone yells, "Oooohh. Did you see it?" And everyone else says, "You're lying," but it really will be true!

Anyway, we will be toasting Cathy and all of you who are watching with us.
Posted by Atlantajan at 3:57 PM No comments: 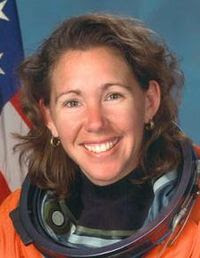 I graduated from the University of Georgia. But I have always pulled for Georgia Tech (except when they play the Dogs). Even more so now that my retired sportswriter husband is making money writing for the Tech website. Georgia has had its share of successes -- it was one of the only schools (if not the only school)to have had two Rhodes Scholars in the last batch. This means something to me because my brilliant stepdaughter is now in her third year as a Rhodes Scholar at Oxford.

But the fact that three former Georgia Tech students will be aboard Endeavor when it launches is pretty cool. They are:

Sandra Magnus, who flew on STS-112 and is now scheduled for a 3 1/2-month stay on the ISS. She earned her doctorate in materials science in 1996.

Eric Boe, a native of Chamblee, an Atlanta suburb, who earned his master's in electrical engineering in 1997.

Shane Kimbrough, a native Atlantan, who earned his master's in operations research in 1998.

Of course, Endeavor will carry four other astronauts, who graduated from various decent schools.

Endeavor is scheduled to head off at 7:55 pm Friday, Nov. 12, weather permitting. It will deliver about seven tons of new equipment and supplies, including a new kitchen and crew facilities for enlarging the station’s resident capacity.
Posted by Atlantajan at 2:50 PM No comments: