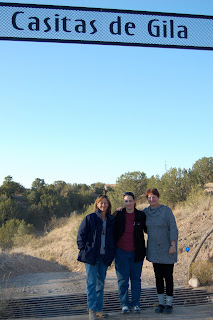 We have been extremely negligent at maintaining this blog. I blame it on Cathy, who got pregnant and lost her way.

Actually, Cathy discovered her pregnancy shortly before she, Mary, my friend, Barbara, and I schlepped to Gila, NM, to see the Leonid Meteor Shower, which was SUPPOSED to be spectacular. It wasn't. During the three nights we were there, we probably saw 25 meteors, few of which were actually Leonids. But what the hey? The sky was astounding, pure black (new moon), with a brighter-than-I-have-ever-seen Milky Way. Also cold. It was in the 20s at night, and even with Cathy's NASA-approved blankies, champagne and other beverages, it was unbearably cold.

However, we had the Casitas de Gila (www.casitasdegila.com, (recommended highly)) host who brought out his 10-inch Orion telescope and showed us lots of stuff. Then, as we were walking back to our casita, we came upon another lovely person, an amateur astronomer who volunteered to show us other cool stuff. Plus, we got to spend time in the gorgeous NM desert. The highlight was Sirius rising, with colors changing from red to green to blue to purple and looking for all the world like those lights folks had in the 60s that changed the colors on their aluminum Christmas trees.

Back in Atlanta, I dragged everybody outside after Thanksgiving dinner at Barbara's house to see the ISS followed shortly by the shuttle -- both high in the sky and very bright. Everyone was impressed.

Recently, we had a double whammy -- the Saints won the Super Bowl and, that morning, STS-130 launched. My sisters Mary and Vicky were at the launch, and I called them from Atlanta. The NASA site, which I had up on my computer, was about 30 seconds behind the actual launch, which I could hear on Vicky's cell phone. So I looked up off my deck, and, damn, there it was. Beautiful.

I have booked a flight to Melbourne to be with Mary when STS-132 launches. That'd be the one with Garrett aboard. Mary thinks we have scared Garrett, who surely assumes we are all STALKERS. Which, I assure you, we are not. Or at least, most of us are not.

Anyway, Cathy's pregnancy is proceeding well. We already know that it's a boy (unusual in our family) and that he will be named "Drew" for his grandpa who died last April and is a big reason we are all space nuts. Drew will be born sometime in late April, and Cathy will post a photo of him (Cathy?) in his new NASA onesie.

Meanwhile, please check out the Traveler's Guide to the Planets on NatGeo. It's amazing.
Posted by Atlantajan at 5:54 PM No comments: