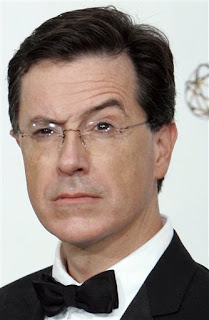 Stephen Colbert is a NASA fan. I mean, this is the guy who introduced our hero, Garrett, to the late night comedy tv audience. And all he wants in return is to have his name on the latest ISS room, which will be delivered later this year. Thus far, "Colbert" is leading in a NASA contest to name the room. I, personally, am okay with that. Of course, "Colbert" is up against some pretty hefty competition, like "Serenity," "Legacy," "Earthrise" and "Venture," all of which sound like 70s girls' names. The new room will feature lots of windows and a machine that converts urine into drinking water. Yum.

Other US rooms on the Space are named Unity, Harmony and Destiny, all of which sound like 80s girls' names.

NASA doesn't have to abide by the results of the contest, so Colbert is by no means a done deal. But, for what it's worth, I'm voting for "Colbert."

But the next room better be named the "Ward."
Posted by Atlantajan at 7:49 PM No comments: