Twenty years ago today, STS-31 launched, carrying a telescope that would revolutionize every branch of the planetary and astrophysical sciences. Named for Edwin Hubble, the American astronomer who discovered the importance of the Doppler Shift in determining the existence of galaxies other than the Milky Way, the Hubble Space Telescope carried the hopes of a generation of scientists who thought it had the potential to change everything we know about space.

They waited. When the first pictures came back, they rushed to their computers with the enthusiasm of a five-year-old rushing downstairs at Christmas, only to find that Santa had decided this year to exercise a heretofore unknown sadistic sense of humor by leaving under the tree a gaily wrapped toothbrush.

Turns out the primary mirror was too flat at the edges by an astonishing 2.2 microns. The period at the end of this sentence is almost 400 microns. We are dealing here in sizes that are almost too small to comprehend. Those 2.2 microns made Hubble the butt of jokes by late-night comedians and put the telescope in the company of such disasters as Titanic and the Edsel. 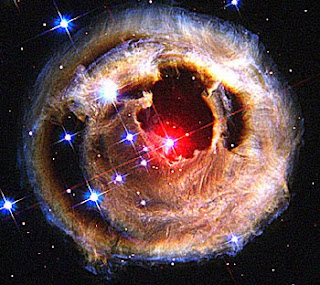 In December 1993, STS-61 came to the rescue. Over the course of five spacewalks, Endeavor's crew replaced mirrors, cameras, electronics and the telescope's solar array. The timing of the repairs was no accident. Astronomers knew that Comet Shoemaker-Levy was heading for a suicide mission to Jupiter, and, since scientists had never observed a collision between two space objects, they were understandably anxious to get Hubble working the way it was intended to. Seven months after the repair mission, the comet crashed into Jupiter. Hubble's pictures of the event were everything NASA had expected.

And then came the really pretty pictures. It is a measure of Hubble's contributions to, not just science, but popular culture, that people all over the world, even those with only a passing interest in space, use its photos as wallpaper on their Dells and Macs. 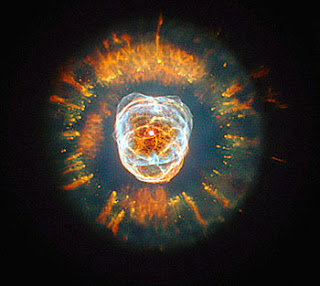 Hubble will stop transmitting sometime in 2014. Its successor, the James Webb telescope, is bigger and better and will be launched some time that year into an orbit 1.5 million miles from earth. I expect a few tears will be shed at NASA when transmissions from Hubble cease. 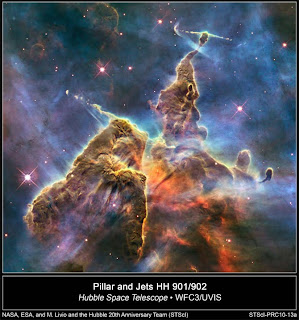 I am including some of my favorite Hubble photos here. In order from top to bottom, they are "Starry Night," a red supergiant near the edge of the Milky Way galaxy; "Eskimo," a nebula; the Carina Nebula, one of the newest Hubble photos; and a generic photo of stars that takes my breath away. 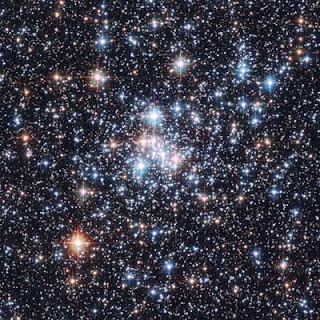 I also urge you to check out NASA's website for more photos and information on Hubble.

Finally, I would like to say this: It is estimated that Hubble has cost somewhere between $4 billion and $6 billion to date. In my opinion, it was money well spent.
Posted by Atlantajan at 3:11 PM No comments: 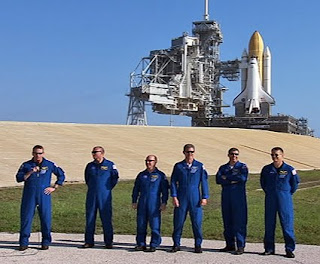 Atlantis rolled up to the pad yesterday for what will be its last mission. This is the 39th time Atlantis has rolled onto the pad, though only its 32nd launch (technical issues and weather accounted for the others.) Atlantis is the only shuttle to have also had a "half roll," necessitated when a tropical storm weakened and the shuttle, which was rolling off the launch pad, got a "never mind" from NASA and rolled back on. Atlantis is the fourth of NASA's shuttles, younger than Columbia, Challenger and Discovery and older than Endeavor.

The shuttles, with their 2.5 million parts, have been called the most complex machines ever created by humans.

Atlantis's mission is to deliver a Russian-made research module to the ISS.

The crew of six is led by our man, Garrett (well, no it's not, but this blog isn't about Commander Ken Ham). Anyway, here are the guys who will make this thing go:

Among them, they have logged more time in space than I have logged at Manuel's Tavern, and, let me point out, that is no small amount of time.

Mary and I will be there, waving to Garrett, and asking plaintively, "Do you think he can see us?"
Posted by Atlantajan at 5:37 PM No comments: