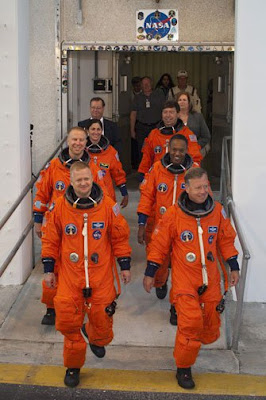 The crew of STS-133 completed a practice run today, and all went well. Discovery Commander Steve Lindsey, pilot Eric Boe, and specialists Alvin Drew, Tim Kopra, Michael Barratt and Nicole Stott are now headed back to Houston, the place they take astronauts so they won't be that sad to leave Earth.

Discovery, which launches on Nov. 1, will spend 11 days in space. It will deliver the Permanent Multipurpose Module (PMM), which will provide additional storage for the station crew, spare components (c'mon, just say "spare parts") and the Express Logistics Carrier 4, which holds large equipment (refrigerators? buses? backhoes?). It will also carry Robonaut 2 ( R2), which you think they would have named Robonaut 2, Device 2, so it could be R2D2. Who's naming these things?

Once Discovery launches, R2, which is inside the PMM and will become a permanent resident of the ISS, will be the first human-like robot in space.

But Garrett is not going, so who really cares? Not this blog.

(Actually, this blog does care because this blog loves the space shuttles and space in general. Almost as much as this blog loves Garrett. But at least it will give Garrett a chance to see the Yankees, with the highest payroll in baseball, beat up on the Rangers, who have the fifth lowest.)
Posted by Atlantajan at 5:49 PM No comments:

John Huchra, a professor of cosmology at the Harvard-Smithsonian Center for Astrophysics, and the man who (with two women, Margaret Geller and Valerie de Lapparent) mapped the universe and turned conventional theory about galaxies on its head, died last Friday. His mapping of the Coma Supercluster was possibly the most famous map of the universe ever made, largely because it looked like the stick figure of a person. The supercluster was in the middle of a "Great Wall" of galaxies with a length of about six hundred million light years. It confirmed that the galaxies in the universe are arranged in sheets and walls surrounding large nearly-empty voids.

“His passing has upset more of us than I remember for any other astronomer,” said Tod Lauer, an astronomer at the National Optical Astronomy Observatory in Tucson, in a New York Times obit.
Posted by Atlantajan at 7:35 PM No comments: