Charlie Bolden gets the nod 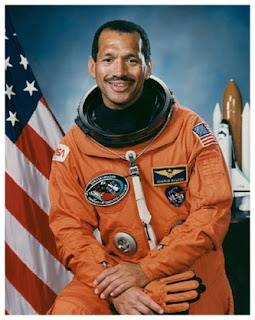 President Obama has tapped Charlie Bolden to be the new NASA administrator. Bolden is a strong supporter of Project Constellation, and he has a proud history as an astronaut and a Marine.

Charlie flew on the STS-61C Space Shuttle Columbia mission, during which flight crew members deployed the SATCOM KU satellite and conducted experiments in astrophysics and materials processing. The mission ended shortly before the launch of the Challenger in 1986.

He also flew on STS-31, Space Shuttle Discovery, which launched on April 24, 1990, and deployed the Hubble Space Telescope.

Then, on STS-45, Bolden commanded a crew of seven aboard Space Shuttle Atlantis, the first Spacelab mission dedicated to NASA's Mission to Planet Earth. During the nine-day mission, the crew operated the twelve experiments that constituted the ATLAS-1 (Atmospheric Laboratory for Applications and Science) cargo. ATLAS-1 obtained a vast array of detailed measurements of atmospheric chemical and physical properties, which contribute significantly to improving our understanding of our climate and atmosphere. In addition, this was the first time an artificial beam of electrons was used to stimulate a man-made auroral discharge.

Finally, in 1994, he commanded a crew of six aboard Space Shuttle Discovery (STS-60), the first joint U.S./Russian Space Shuttle mission involving a Russian Cosmonaut as a mission specialist crew member.

He's got the cred.

However, he also lobbied for ATK, which manufactures the shuttles' solid rocket boosters, and I don't much care for lobbyists being put in charge of billions of dollars of taxpayer jack.

Bolden is a fan of manned space flight, which I think is a good thing. But I don't think manned space flight at the expense of unmanned, robotic missions is necessarily a positive position. I don't see why both can't remain an intrinsic part of our space program. Spirit and Opportunity, the two Mars "droids" have done an amazing job of imparting information over their lifespans, as have the various probes we have launched toward Pluto, Jupiter and the outer reaches of the solar system. And Constellation, which I support, is billions of dollars over budget.

All that aside, I think Bolden is a good pick. It can't hurt to have a former astronaut in charge of NASA.
Posted by Atlantajan at 10:07 PM No comments:

One of my favorite songs ever, and one of my favorite videos ever.
(I still say he should have asked the ISS crew to dance a little, too. Of course, then it wouldn't have been "Where the hell is Matt?".)

Fun fact: The beautiful Palbasha Siddique was a 17-year old high school student in Minnesota when she sang "Praan."

And here are some dancing outtakes. Most are hilarious. A couple are terrifying.

By request of one of the sisters: Jack Johnson's Constellations

Apparently, Jack was stalking my family back when we lived in the beach house. Because this is obviously about us.

It was just another night
with the sun set
and the moon rise not so far behind
to give us just enough light
to lay down underneath the stars
listen to all the translations
of the stories across the sky
we drew our own constellations
Posted by Cathy at 12:46 PM No comments:

Going to the bad in Silver City

I probably shoulda waited, because Cathy can do this post better and funnier. But I am so excited. This year's Leonid meteor shower is supposed to be a "half-storm," meaning 500 meteors an hour as opposed to 1,000, which would be an honest-to-God "full storm."

So Cathy and I were chatting, and we decided to go to Hawaii to watch it. Then we decided that would be frightfully expensive, so we started looking around. And we found this: www.casitasdegila, a five-cabin "resort" in the middle of No-Freakin'-Where, New Mexico. So Cathy called Mary, who said to her husband, "What if I went to New Mexico for the Leonids?" Her husband, being the smart guy that he is, responded,"Let me guess. Janet and Cathy?"

So the three of us, along with whatever sisters and Honorary Ward Sisters we can talk into it, will be in Gila, NM, for what we all hope will be the experience of a lifetime, meteor shower-wise.

Gila is butt-up against the Gila National Forest, and far, far away from any light pollution. It'll be cold at night (well, not just cold but COLD), but, like Mary said, we won't need a cooler for our champagne.

There are no televisions and no cell phone access in Gila, but there is WIFI, so maybe we'll blog a bit during the five days.
Posted by Atlantajan at 10:02 PM No comments:

Once when I was in the Coast Guard, I drank a 40 of Schlitz Malt Liquor and chased it with a bottle of Boone's Farm Strawberry Hill.*

Oddly enough, I'm *not* the one who looks psycho in this photo. 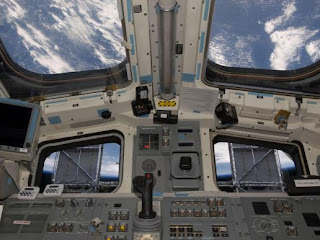 John Grunsfel and Drew Feustel completed the last of the Hubble repairs/upgrades yesterday. Today, at roughly 8:30 am, the Atlantis crew put that baby back into space. Technicians from the Goddard Space Flight Center had made special tools to be used in the repairs/upgrades. Those tools will probably soon be adapted into new Gator Grips or other "only-on-television" tool offers that will make gardening/cooking/home repair/ ice cream sundae making easier. This is why we need the space program; not because it gives us a sense of accomplishment, though it surely does; and not because it shows us that we are a small speck in the universe, though it does that, too.

We need the space program because it gives us a small picture of the possible.

And it offers the best and the brightest among us a place to make a difference. Even those who are nameless and faceless but whose intelligence and common sense make it possible for those of us without a whole lot of either to feel some pride in their work. The astronauts are the ones who risk their lives every time they go into space. But it's the people on the ground, who will never sell their autobiographies and never have a street named after them, who do the heavy lifting.

This blog reflects our devotion to Garrett Reisman, The Coolest Man In The Universe, and all the astronauts who have gone before and come after him. But today, at 8:30 am, I was thinking about those people, sitting in mission control and at the Telescope Center in Greenbelt, Md., and saying a silent "Thank You." Because without them, we wouldn't have any astronauts to idolize.
Posted by Atlantajan at 6:53 PM No comments:

How did I miss this important news alert?

I guess my threatening letters* ("As God is my witness, NASA, I'll never buy Tang again if you don't give him another flight assignment immediately.") paid off, huh?

*That's a joke. I'd never send anyone a threatening letter.
I'm a modern gal. I use e-mail.

Mike Massimino on looking at Earth from space.

What poetry! What an astounding way to describe it.

It seems that Mike Massimino is suffering from a severe case of Overview Effect.

And it's just lovely to read.