Garrett Comes Home. Oh, and Those Other Guys 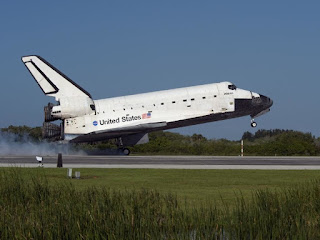 Okay, a day late and a few dollars short. But Atlantis came home beautifully. Some interesting things I learned on my trip to Florida (I am going by what Mary told me, so if any of this is wrong, blame her. Although she does know her stuff):

The BIG (as my brother-in-law, Jon, calls the VAB or Vehicle Assembly Building, is so big that it has its own climate.

The path that the shuttle rides on from the BIG to the launch pad is paved with stones from some river in Tennessee. Why? Who knows? Mary says it may be one of those low-bid deals from the contractor who built it. I do know they are pretty stones, and it's a loooonnnnggg path, so I guess some river in Tennessee is a bit deeper than it used to be.

Cool stuff at KSC, including launch pads, is not very well marked. And KSC (or rather, Canaveral Air Force Station) is very big. So if you don't know where you are going, you can spend a bit of time trying to find what you are looking for. And they don't have maps. So you drive on ICBM Road and Titan Road and Saturn Lane and Moonwalk Court (I made up some of those), and hope you find what you are looking for. We did, eventually.

For you birders out there, the Merritt Island Wildlife Refuge, right next to KSC, is a wonderful place to be; partly because there are driving paths and you don't really have to get out of your car to bird-watch, although, if you're like us, it's a constant "Oh! Stop the car! Stop the car! I think I just saw a (spoonbill, hawk, avocet, gator, willet, glossy ibis)!" You know you are jaded when you say, "Oh! Wait! Wait! Never mind, it's JUST a great blue heron." We did see a juvenile cottonmouth chow down on an unfortunate fish. Best thing (aside from the wildlife) is you can look in the distance and see KSC.

Some people are stupid. Mary and I stopped numerous times along the road out of the refuge to pick up plastic McDonald's cups, beer cans, etc. Who is insensitive enough to toss that kind of trash out in a wildlife refuge?

Watching the NASA channel during a mission is pretty cool. Mary and I were driven indoors because of a Biblical plague of lovebugs and turned on the teevee. Someone on the ISS was asking someone at Mission Control how to find the scissors. The question was not "Where are the scissors?" It was "What is the location of the scissors?" The answer was a good five minutes long and involved stuff like "the right compartment, the second node," etc. But it was clear that the guy answering knew exactly where the scissors were. Now, why they needed the scissors is beyond me. I know Garrett did not need a haircut.

Nothing we saw the entire time we were there made us think we had made a mistake in creating this blog. Garrett is just one awesome dude.
Posted by Atlantajan at 4:58 PM No comments: