Neither should reality tv, but... 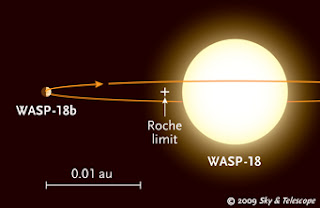 The journal, Nature, is reporting that the Wide Area Search for Planets (WASP, of course) has found a planet that shouldn't exist, given everything we (and when I say "we" I mean "People who are way smarter than I am") know. The planet was discovered by -- and the Nature article written by -- a team headed by astrophysicist Coel Hellier of Keene University.

WASP-18b is about 325 light-years away. It's huge -- 10 times the mass of Jupiter, but what's crazy is that it apparently is just 1.4 million miles (a walk to the mailbox in astronomical terms) from its star. Its orbit is less than one Earth day. Sky and Telescope says its surface temperature is a balmy 3,800°F

The article points out that tidal interactions should have stretched the star and slowed the planet to the point where they smashed into each other a long time ago. The planet is very near the "Roche Limit," which is the point at which its star's gravity will start to tear it apart.

Astrophysicists are watching WASP-18b, either to see its death throes or figure out why they aren't happening.

Favorite part of the story: "The 750-word article is making some big waves in the extra-solar planet community." I don't know why I find that hilarious.
Posted by Atlantajan at 11:57 AM No comments: