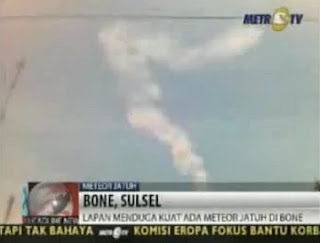 Spaceweather.com, which, if you don’t visit it often, you really should, has a regular listing of Potentially Hazardous Asteroids (PHAs), which are defined as “space rocks larger than approximately 100 meters that can come closer to Earth than 0.05 astronomical units.” (An AU is the mean distance between the sun and the Earth, and we all know that that is – say it with me, everybody – 92.something million miles.)

On October 8, one snuck up on them, blasting through the sky in Indonesia and freaking out the local population who thought, naturally, EARTHQUAKE! According to NASA’s Near Earth Object Program (which is missing a hyphen, but what can you do?), the explosion caused by the 10-meter asteroid “triggered infrasound sensors of the Comprehensive Nuclear-Test-Ban Treaty Organization more than 10,000 kilometers away.”

Not to worry, though. NASA says asteroids smaller than 25 meters can’t really do much damage, unless, of course, they fall on your car. And asteroids the size of the Indonesia one only hit Earth every 2-12 years (seems like a remarkably large gap there). And I am sure I will have forgotten all this by 2011.
Posted by Atlantajan at 9:49 AM No comments: