Going to Mars (without having to learn all that sciencey stuff) 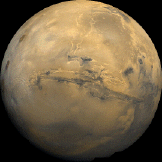 Our friend, Heather Archuletta, who runs the wonderful Pillownaut blog, posted this back in 2009, but I thought it was worth reposting here (as is much of her stuff, but that would be stealing...)

Built at the Jet Propulsion Laboratory, Curiosity, the largest Mars Science Laboratory ever, will launch this fall and land on Mars some time in the summer of 2012. And there's still time to get your name on a computer chip that will ride to Mars on Curiosity (which is currently my favorite Mars rover name). All you need to do is click on the Send Your Name To Mars link and fill in the information, and you're on board!

More than a million people worldwide have signed up, and , if you're curious about where they live, you can check out the World Participation Map.

"Curiosity is faster, and able to scout much farther and climb higher than the existing Mars rovers (partly because of enhanced tools and also because it will utilize nuclear power instead of solar power).

The size of the rover was such that it required a new landing technique:

The Entry, Descent, and Landing (or EDL) of Curiosity will be similar to the Phoenix Mars Lander, which in itself was an elaboration of those used for Mars Pathfinder and Viking. All used parachutes in descent, but this newest hardware will enjoy much greater precision in guided entry, no airbags for the bounce, and a "sky crane" touchdown system, which will allow a soft, wheels-down landing.

Once she lands, we'll have all new and advanced ways to estimate uncertainties in terrain slopes, wind characteristics, atmospheric density and pressure, rock compositions and water prevalence."

If you sign up, you get a cool certificate. I have taken the liberty of sending Cathy's children to Mars. I don't think she'll mind.
Posted by Atlantajan at 6:08 PM No comments:

There are a lot of memories associated with those dark days, but here is one that stayed with me all these years:


Shortly after a wreath was dropped from a helicopter hovering off the Florida coast last weekend, part of a memorial service here for the seven Challenger astronauts, NASA cameramen filming the event recorded a remarkable moment.

A group of dolphins suddenly and unexpectedly appeared in the frame, leaping in unison from the green sea, and then disappearing just as quickly below the surface, barely 25 yards from the wreath.
For many here, the sudden appearance of the dolphins was, in a way, both chilling and reassuring. Greek and Mediterranean legend treated the dolphin as a creature of good fortune and intelligence, a talisman for voyages not only on sea and land but also for voyages into the afterlife. (In maritime legend, the dolphin is a symbol of resurrection. - C.)


When the film showing the dolphins was brought back to the Kennedy Space Center, photo technicians immediately surrounded the television monitor, playing that segment of tape over and over again, as they leaned into the screen, trying to count the number of dolphins.

There were, in fact, only four visible, at the extreme left edge of the frame. But the camera also showed another splash, just out of camera range. Nobody could ever be sure, but among space center employees last week the unofficial count concluded there were probably three other dolphins that day, splashing beside the bobbing wreath.
-NYT, 2/7/1986 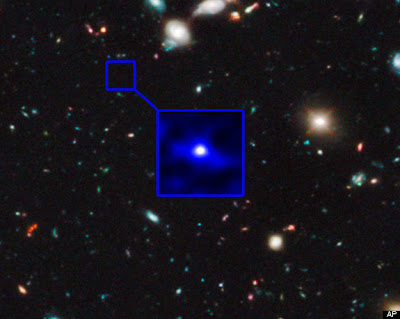 A team of astronomers says it has found the oldest galaxy yet discovered, a blob of light they estimate is from 13.2 billion years ago, which, if you know your stuff (and why would you be here if you didn't?) is a mere 500 or so million years after the Big Bang, which is nothing when you're talking Big Bang. The picture shows what the astronomers at UC Santa Cruz say is the galaxy that existed 480 million years after the Big Bang and the position in the Hubble Ultra Deep Field (HUDF) where it was found.

Other astronomers say that the team that discovered the galaxy had previously "discovered" three others that old, decided they weren't really galaxies, and then discovered this one.

According to Nature, where the study was published, the team leader, Garth Illingworth, noted that there is a 20 percent chance that the smudge they found is contamination, but insisted "we're pretty sure it's a real object."

Anyway, the astronomers are engaged in a classic nerd fight, presumably throwing protractors and slide rules at each other. You gotta love it.
Posted by Atlantajan at 4:34 PM No comments: 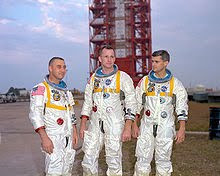 Today is the 44th anniversary of the deaths of Gus Grissom, Ed White and Roger Chaffee. The three were killed when the Apollo 1 command module caught fire during pre-launch activities.

Grissom had had a close call earlier when the hatch on the Liberty Bell 7 blew after splashdown, causing his spacesuit to fill with water and nearly drowning him. In memory of the event, Grissom named the Gemini 3 capsule the "Molly Brown," after the unsinkable survivor of the Titanic. It was a name that horrified NASA and led to a rule against the naming of future spacecraft.

Ed White was the first American astronaut to walk in space. He has a star (Iota Ursae Majoris) named after him. The star is nicknamed Dnoces ("second" spelled backwards) for him -- Edward Higgins White II. White Hill, part of the Apollo Hills on Mars, is also named for him.

Roger Chaffee was the communications officer on the Apollo 1 flight. He reported the fatal fire and continued to communicate with ground control until smoke filled the cabin, killing the astronauts. Like White, Chaffee has a star named after him -- Gamma Velorum, which is nicknamed Regor (again, his name backwards).

The three knew the risks. Grissom said, "If we die, we want people to accept it. We are in a risky business and we hope that if anything happens to us it will not delay the program. The conquest of space is worth the risk of life."

Photos are of the crew and one of the columns on the Apollo 1 launchpad at Canaveral. The words, "Abandon in Place," are stenciled on it. 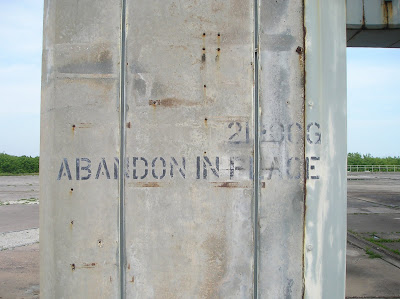 Posted by Atlantajan at 3:42 PM No comments: