Now will all you lunatic conspiracy theorists please find another hobby?
Posted by Cathy at 8:40 AM No comments: 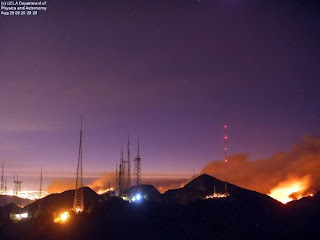 Firefighters waged a five-day battle to save the Mt. Wilson Observatory from the wildfires raging in the Angeles National Forest. The Mt. Wilson Observatory is important, well, because it's a freakin' observatory. But also because it is where Edwin Hubble discovered that the universe was expanding. To lose that facility would not just be tragic from a scientific standpoint, but from a historical one, as well. And, given the fact that it hosts a wealth of emergency, cellular and television communications towers, well, I mean, LA without television? Could anything possibly be sadder?

From the LA Times:

Mt. Wilson Observatory, site of some of the greatest astronomical discoveries of the 20th century, appears to have escaped serious damage from the Station fire, but scientists working on the mountain say the blaze still managed to take a toll on the ongoing research there.

Hal McAlister, observatory director and head of the CHARA experiment that uses six telescopes to measure shapes and sizes of stars, said he was on his way to teach on Monday at Georgia State University, where he is an astronomy professor, when he heard that firefighters had pulled out and ordered his staff to leave. He was so worried he was unable to teach his class.

As many as 40 different projects were under way, he added, and some people had waited a year to get observing time. They will have to be rescheduled, but McAlister was philosophical about that: "Losing observing time is a small problem compared to losing the observatory," he said.

Charles Townes, a Nobel-Prize-winning astrophysicist at UC Berkeley who recently discovered that the bright star Betelgeuse is mysteriously shrinking, said his team had been using three telescopes on mobile trailers to watch changes in the star CIT 6 when the word to evacuate came down.

The mirrors were just coated with a new aluminum reflecting surface in July. If that was damaged, the observatory might need to do the expensive process all over again.

Tragically, two firefighters died in the blaze, but, right now, it looks as if the observatory has been spared. It will be some time before it is known just how much damage it may have sustained.
Posted by Atlantajan at 8:42 PM No comments: