From Spaceweather.com comes this info:

POSSIBLE PERSEID OUTBURST: This year's Perseid meteor shower could be even better than usual. "A filament of comet dust has drifted across Earth's path and when Earth passes through it, sometime between 0800 and 0900 UT (1 - 2 am PDT) on August 12th, the Perseid meteor rate could surge to twice its normal value," says Bill Cooke of NASA's Meteoroid Environment Office. The following profile is based on the debris stream models of veteran forecasters Jeremie Vaubaillon and Mikhail Maslov: 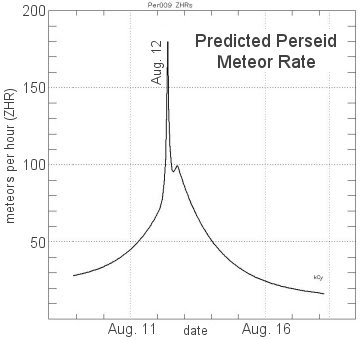 The filament was shed by Perseid parent comet Swift-Tuttle in the year 1610, and this is one of Earth's first encounters with it. "In addition," notes Cooke, "the main Perseid debris stream, which we run into every year, may be denser than normal due to a gravitational enhancement by Saturn. The total combination of these effects could result in as many as 200 meteors per hour (ZHR)."

Bright moonlight will overwhelm the outburst's fainter Perseids, but even a fraction of 200 is a good show. Science@NASA's "The Perseids are Coming" offers observing tips and sky maps.

We're heading up to Wheaton with the Adler folks. Here's the info on that: