Rosebud. Not a sled. 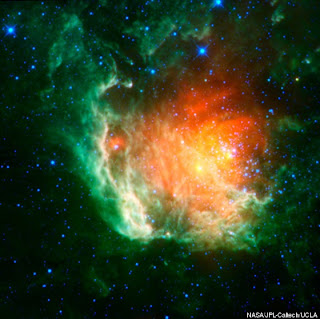 We're used to Hubble's pretty pictures, but now our old friend has company. The Wide-field Infrared Survey Explorer (WISE. Does NASA ever name anything something that can't be made into a nice acronym?) blasted off last December with the goal of scanning the entire sky in infrared light. It is looking for the nearest and coolest stars (which it presumably can identify by their disdain for what currently passes for rock and roll), as well as the origins of stellar and interplanetary systems and the universe's most luminous galaxies.

Today, NASA released the image above, which it is describing as a grouping of stars in the Berkeley 59 cluster, a star nursery in the constellation Cepheus, some 3,000 light years from us. In a flight of fancy not usually associated with astrophysicists, scientists are calling it a "cosmic rosebud blossoming with new stars."

The rosebud-like red glow surrounding the hot, young stars is warm dust heated by the stars. Green "leafy" nebulosity is the product of heated aromatic (exactly what do they smell like?) hydrocarbons, similar to materials that can be found on Earth in barbecue pits, exhaust pipes, Congress and other places where combustion has occurred. The stars are the blue dots to the right of the rosebud.

And, just because it's my favorite galaxy (you have to be a real nerd to have a favorite galaxy), I am attaching WISE's picture of the Andromeda Galaxy. 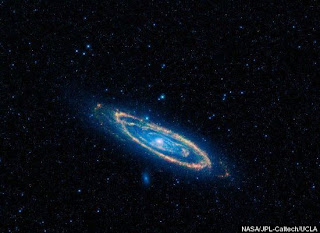 Posted by Atlantajan at 5:44 PM No comments: