Just A Lot of Pictures

From my trip to Florida:

This is a photo of the launch taken by Sam Vega, who drove 18 hours to see the launch when he got bumped off a flight in Arkansas: 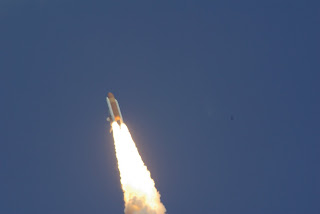 This is the launch pad from which all the Apollo astronauts left earth. It is also where Gus Grissom, Ed White and Roger Chafee died tragically. This is what Grissom said, "If we die, we want people to accept it. We are in a risky business and we hope that if anything happens to us it will not delay the program. The conquest of space is worth the risk of life." Still, you cannot be there without thinking of the amazing courage of those men. They went into space at a time when few had done it before, never knowing whether they would come back. And I'd like to say a word about their wives, who didn't have all the scientific knowledge their husbands had but still supported men who were part of the space program, men who were doing things that had never been done with no assurance that they would live, let alone be successful.

If you look at the photo below, you can see a Delta rocket in the background being readied for a September launch. Also, you can see three of the saddest words I have ever seen on the concrete post in the foreground: Abandon in Place. Wow. 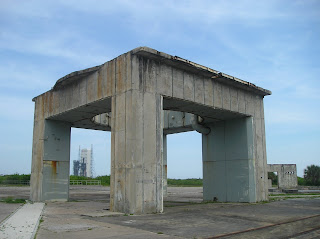 More of SLC (Space Launch Complex) 34, Mary at the site: 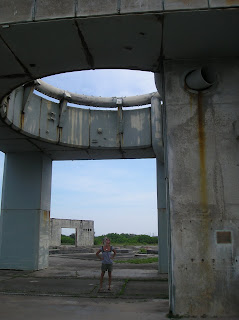 This is one of Mary and me and a lifesize cutout of Garrett. My husband says someone should make a bobblehead of Garrett:

And this is Mary and me in front of the shuttle launch pad: 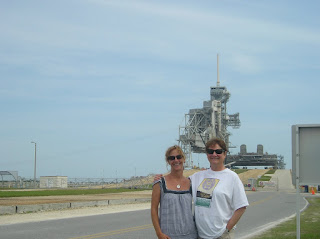 The Mercury 7 memorial. It honors all seven original Mercury astronauts, four of whom took flight from the launch pad behind it. Buried here is a time capsule that is to be opened in 2464 (500 years after its burial) that has the flight plans of the Mercury missions. The phrase, "Si monumentum requiris, circumspice," is engraved here. The epitaph of Christopher Wren, the architect who built St. Paul's Cathedral in London, it means, "If you seek a monument, look around you." 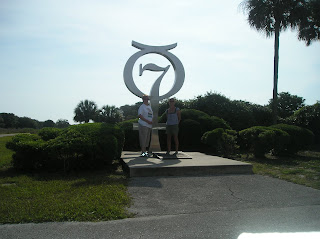 The Vehicle Assembly Building, one of the largest buildings in the world, was originally built for assembly of Apollo/Saturn vehicles and later modified to support Space Shuttle operations. It is known as the VAB, but my brother-in-law calls it the BIG. 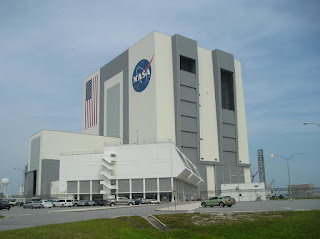 Posted by Atlantajan at 7:27 PM No comments: 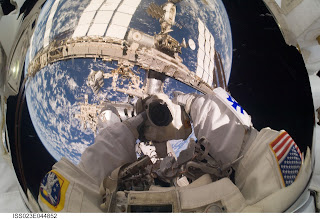 Well, Atlantis took off on schedule, and we were right there, waving goodbye. The launch was spectacular, as launches always are. Yesterday, Garrett and Piers Sellers completed the mission's first spacewalk, having installed Rassvet, the Russian-made module that will provide additional storage space (those Russians on the ISS just brought waaayyy too many shoes). Actually, Rassvet is also a docking station for future Russian spacecraft.

Above is a picture Garrett took of himself (more or less) during the EVA. Also, if you are not watching the NASA Channel during this mission, you are missing some fun stuff. For instance, we just heard a request for "the scissors," as in "What is the location of the scissors?" Not "Where are the scissors?" Anyway, the answer was five minutes long, but clearly the person answering knew exactly where the scissors were.
Posted by Atlantajan at 11:49 AM No comments: