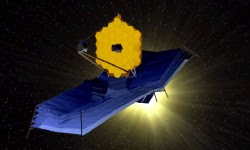 The James Webb Space Telescope (JWST) is set to launch, God willing and the creek don't rise, in June 2014, thus overlapping with the Hubble, which should cease transmission (RIP) some time that year. The telescope has a 21-foot-diameter primary mirror, making it the world’s largest orbiting observatory in any wavelength when it begins operations. It also will be the largest infrared (IR) telescope in existence.

More than 7,000 astronomers who have been involved with Hubble over its two decades of service are expected to use Webb. The difference between the two: Webb’s IR range will allow it to see objects 10-100 times more faint than Hubble can, opening the door to the universe’s earliest days. The Webb’s greater resolving power in infrared, and that wavelength’s ability to see past dust that obscures light from the universe’s earliest days, is expected to give astronomers images of events just 250 million years after the universe was born, in other words, when the universe was pretty much still a toddler.

According to NASA, "seeing that far back will reveal clusters of the Universe’s earliest objects as they were being formed, says JWST Senior Project Scientist John Mather, a Nobel Laureate at Goddard. Astronomer Marcia Rieke of the University of Arizona expects to see disks of matter becoming planets around stars."

This is more NASA: "Observing the physical and chemical properties of planetary systems and their potential for supporting life are among Webb’s major goals. The telescope should be able to see relatively small planets—a few times the size of Earth—that Hubble cannot, says Gardner. But it also will have greater sensitivity to the atmospheres of stars closer to Earth. It even can provide close-ups of planets within the Solar System, so long as they are the duller ones like Mars, not bright Venus or Mercury, which would overpower its optics at so close a range."

The Webb dwarfs previous telescopes. After the vibration of launch, the mirror assembly must be unfolded into what the design team calls its “rough shape.” That process involves lifting each of the 18 primary mirror segments free of its launch hooks. Each of them is computer-controlled in six degrees of freedom, plus a seventh that pushes or pulls the center of the mirror for radius curvature adjustment. Each mirror has its own actuators to control these movements. After the mirrors are unhooked, the actuators must achieve a “wave front” alignment for each one to a tolerance of 20 nanometers—1/5,000th of a hair.

A full-sized mock-up will go on public display June 1 at the 2010 World Science Festival in New York City’s Battery Park.
Posted by Atlantajan at 6:23 PM No comments: