My dad has died 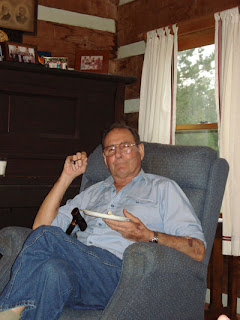 My dad is probably why my sisters and I so love the night sky. He loved to take us outside and try to impart his limited knowledge of the night sky. He knew the Big Dipper, of course, and he knew that the Pleiades (the seven sisters, which, in later years, he said were me and my sisters, along with our Mom) were being chased by Taurus the Bull, who was being tracked by Orion the Hunter who was being trailed by his faithful dog, Canis Major. When we were in Tampa, living on MacDill AFB, he bought a cheap telescope because he knew that men would be walking on the moon. Then he, once again, hauled us all out of bed to show us the moon when Neil Armstrong and Buzz Aldrin were walking on it. Other kids watched it on television, but he thought it was important that we look through the telescope. We were all disappointed that we couldn’t actually see them, but we believed him when he said they were there.

I am sure that it is because of him that my sisters and I are still crazy over the night sky. We will basically drop what we are doing to head to Fernandina, where the night sky is still dark, for a decent comet sighting or meteor shower. All of us, me, Vicky, Alice, Dot and Mary, were there for the Leonids last year, which were disappointing. Cathy, who is nuts over the night sky but lives in Chicago, couldn't make it, but we had her on the cell phone, where she sang "Aquarius" and intoned the beginning of Star Trek-- "Space, the final frontier..." with us. As it turned out, the meteor shower wasn't so great, and the dew got to us all, so most of us gave up and went inside. I stayed outside, because, well, I am stupid. I did see five shooting stars after everyone else went in, but that seems hardly worth it.

I am looking forward to this year's Leonids, which are supposed to be not just a meteor shower, but a meteor "storm." We will be there. And we will all be thinking of my Dad, who would have been so pleased to have his daughters out in his backyard looking up at the sky. At least, I like to think so.
Posted by Atlantajan at 11:33 PM No comments: