I would vote for Bach, all of Bach, streamed out into space over and over again. We would be bragging, of course, but it is surely excusable to put the best possible face on at the beginning of such an acquaintance. We can tell the harder truths later.

-Famed biologist Lewis Thomas, when asked for his suggestion about what Earthlings should broadcast into space in hopes of contacting alien life 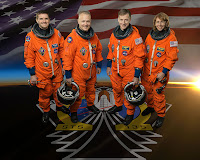 NASA has announced the crew for the STS-135 crew, the last shuttle astronauts. They are: Commander Chris Ferguson, Pilot Douglas Hurley, Mission Specialist 1 Sandra Magnuson and Mission Specialist 2 Rex Walheim. The last shuttle mission to fly with just four crewmembers on board was STS-6, launched on April 4, 1983, 28 years before STS-135, aboard Space Shuttle Challenger.

Multi-Purpose Logistics Module (MPLM) Raffaello would make up the majority of the payload. The MPLM will be filled with 16 resupply racks, which is the maximum that it can handle.

Garrett was aboard Atlantis's last fight, STS-132, which launched last May. So we have a serious thing for Atlantis. And we will be there, just as we were for Garrett's flight.
Posted by Atlantajan at 10:31 PM 1 comment: